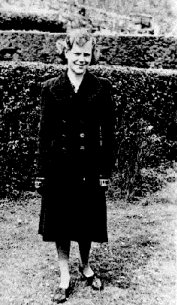 When 1942 came along all clothes and furniture had the familiar CC41 mark.
It stood for "Civilian Clothing" and the 41 represents the year it first came in to being.
This was a ruling by the government to keep the materials for both clothes and furniture to the barest minimum. At the same time keeping a smartness which most could afford as well as quality for the amount of coupons they had.
The above double breasted coat would be about 16 coupons and cost 12 guineas.
The coupon allowance was 66 to start off with but as time went on so the allowance for coupons went down to 60 in 1942,
40 in 1943
48 in 1944.
A man's suit was 26 coupons, one hanky 1 coupon, a ladies woollen dress 14 coupons a blouse 5 coupons. Supplementary clothing coupons could be applied for if you were getting married or having a baby or if you had been bombed out.
It was a bonus if anyone was lucky enough to get some parachute silk to make a dress. Plus making underwear from it too.

The young lady modelling the double-breasted coat in the photograph was killed in a bombing raid in 1942.
She worked in a butcher's shop called Eastmans in Kingsbridge and when an air-raid started the staff went in to the walk in freezer but unfortunately a bomb struck the building next door and fractured the gas main. Consequently they were all gassed. 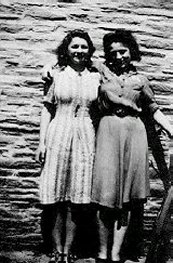 These two simple dresses would have to suffice the war, dressed up with different collars, buttons and belt. The one on the left being a figure hugging one probably made out of cotton and tied at the back. If you look closely enough you will see that it has a little white collar. This could have been put on to brighten it up if it was over a year old.
The other one is a shirtwaister.

Women were determined to look presentable during the dark days of WW2 and blackout material was not on ration. This led to many buying the material and making skirts from it which they prettied up with perhaps two rows of bias binding round the hem with crocheted roses set in between the rows. Or a couple of rows of lace about three inches apart just to make it look pretty. Notice the hairstyle of the one in the frilly blouse below. It was known as the Victory Roll because you will notice it forms a V.