A Gasmask for Baby 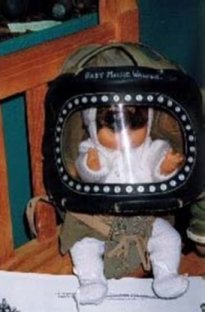 The doll was put in this respirator for people to see how a baby would have survived during a poison gas attack.
The respirators were cumbersome objects that had to be manually pumped.
No small feat for a person who themselves were wearing a gas mask.
Thank God they were never used.

A Gasmask for older children 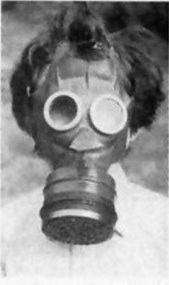 Everyone had an identity card and a gas mask too
Nasty horrible things to wear, stuck to you like glue.
It was a daily ritual to practice wearing that gas mask
None of us liked doing it because it really was a task
Teacher would then come round to see if it fitted snug
Pulling at the head strap she would give it quite a tug.
I wouldn't mind but it was supposed to keep us alive,
But how if we had to wear it long would we all survive?
I was glad when we finally stopped that daily routine
But we still had to carry it no matter where we'd been.
We were never parted from it even when visiting the loo
But as soon as the war ended they disappeared from view.